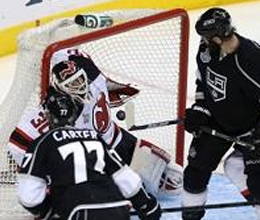 A new season of hockey in the NHL gets underway this week starting with four games on Wednesday night. The Pittsburgh Penguins come in as the defending Stanley Cup Champions after beating the San Jose Sharks in six games in last season’s NHL Finals. While the futures betting odds for winning this year’s title have been posted for quite some time now, all the top online sportsbooks have been constantly tweaking the numbers to reflect the betting money coming in.

The Penguins remain at the top of the list when it comes to futures odds to win the Eastern Conference and over in the West the favorite to win with most books is the Chicago Blackhawks. Both of these teams are no strangers to winning NHL titles, so you probably cannot not go wrong with a bet on either to end up on top again this season. For good measure you might want to add the Los Angeles Kings to the list at a bit longer odds to win the 2017 Stanley Cup. Going back to the 2008/2009 season, one of these three teams has won the Stanley Cup in seven of the last eight years. The only exception was Boston’s run to a NHL title in 2011.

It is rare to see this kind of dominance in any major sports league other than the NBA, but when it comes to betting NHL futures this can give bettors a powerful edge against the books. It really becomes a stretch to find any better value out there past these three teams when it comes to placing a few futures bets on the upcoming season.

The Washington Capitals are always near the top of the list when it comes to futures odds to win the East as well as the Stanley Cup, but their epic fails in the postseason are becoming an expected rite of spring. Going back to the 2007/2008 season, the Capitals have made it into the playoffs eight times in nine seasons. They finished first in their division race six times, but the farthest Washington has ever gotten in the playoffs is to the conference semi-finals.

Another highly touted team in this year’s NHL futures is the Tampa Bay Lightning as a close second or third-favorite to win the East and one of the Top 5 teams in the league to win the Stanley Cup. The Lightning may actually offer some value given their run to the Stanley Cup Finals two years ago followed by a loss to Pittsburgh in this past season’s conference finals, but what is going to get the Lightning past the hump this season? Their current roster remains pretty much intact from last season’s run to second place in the Atlantic Division with 97 points. They have solid goaltending in Ben Bishop, which is always a plus, but that may not be enough to dethrone one of the Big 3 for the 2017 title.

Florida actually won the Atlantic Division last season with 103 points and the Panthers’ odds to make a run at a NHL title this season are much farther down the list. The New York Rangers and the Islanders were highly competitive in the race for the Metro Division title last season, but each team’s odds run pretty long to get past Pittsburgh this year.

Over in the Western Conference, the top teams on the list after Chicago and Los Angeles include San Jose, Dallas, Nashville and St. Louis. All four of these teams are solid contenders to win a conference title, but all of them have yet to show that they have what it takes to hoist the Stanley Cup.