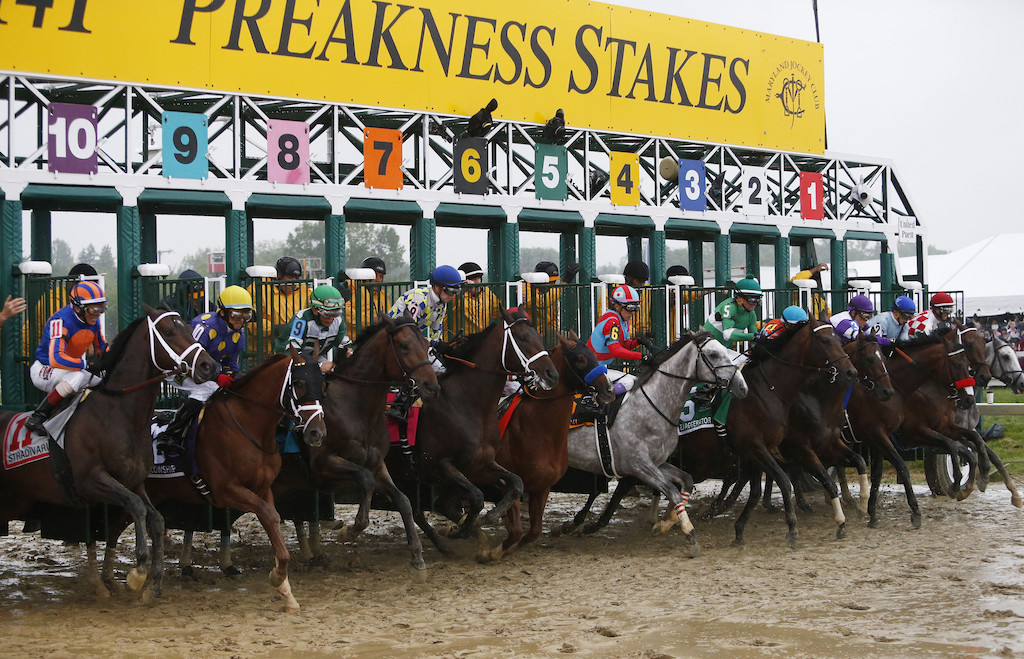 An Early Look at Betting On this Year’s Preakness Stakes

Following an exciting finish in last Saturday’s Kentucky Derby at Churchill Downs to kick off this year’s Triple Crown horse racing season, it is now time to turn our full attention to next Saturday’s Preakness Stakes at Pimlico as the second leg in this iconic horse racing series.

Always Dreaming may have been a bit late to the party after a slow start to his racing career under the watchful eye of famed trainer Todd Pletcher, but last week’s 2 ¾ victory at Churchill combined with an impressive win last month in the Grade 1 Florida Derby as firmly cemented this Kentucky-bred three-year old as the clear favorite to win the 142nd running of the Preakness.

Other top contenders coming off last week’s race include Classic Empire, Lookin at Lee, Gunnevera and Hence, who are all listed as confirmed for this race. A few three-year olds making their Triple Crown racing debut in the Preakness include Royal Mo, Conquest Mo Money and Cloud Computing. All told, the current number of horses set to run in this year’s Preakness stands at 10 according to the race’s official website as well as the list of entries on several online sportsbook’s futures odds to win.

One of the best ways to bet on any major graded stakes race is on the odds posted for head-to-head matchups. It can be far easier to cash in a winning ticket on a race between just two horses as opposed to picking the outright winner in the whole field.

While the actual betting odds will not be released until later next week when the actual post positions for this year’s Preakness will be drawn, but is safe to assume that Always Dreaming will have the slight edge against Classic Empire in that particular head-to-head matchup. The Kentucky Derby winner has already been listed as a -110 odds-on favorite to win the second jewel in the Triple Crown. Classic Empire’s odds to end his run by winning this race have been set at +450.

Going back over the early stages of the Kentucky Derby, Always Dreaming broke clean while Classic Empire got caught up in a major scrum that knocked him off course. He still rallied to finish fourth on a late charge, which is why he opened the Derby betting as a 4/1 favorite on the morning line. With half the horses in the field for this race, the top two three-year olds in this year’s class should be able to fully challenge one another the entire 1 3/16 miles around the dirt track at Pimlico.

Royal Mo has the best futures odds (+1200) and the highest Horse Racing Nation rating (7.26) of the five probable horses in the Preakness field that did not run in last week’s Kentucky Derby, but I could make a strong case that Conquest Mo Money deserves that distinction.

Trained by Miguel Hernandez, this son of Uncle Mo proved himself to be a legitimate Derby contender with a second-place run behind Classic Empire in the Arkansas Derby. However, his handlers decide to forego the trip to Churchill Downs to focus all of their energy on winning this race. The New York-bred three-year old’s current betting odds to win the Preakness stand at +1600 on one prominent sportsbook’s futures odds, which offers quite a bit of early value in my book.

One of the biggest betting props heading into the Preakness Stakes has to do with the Kentucky Derby winner laying claim to a Triple Crown title by winning this race and next month’s Belmont Stakes at Belmont Park. The current odds for Always Dreaming winning the 2017 Triple Crown still heavily favor NO at -500 with the moneyline odds set at +300 for YES that he will go on and win the final two legs.

Before American Pharoah made his historic Triple Crown run in 2015, you would have to go all the way back to 1978 to find the last time a three-year accomplished this feat. There have been a number of horses in recent years to win both the Kentucky Derby and the Preakness, but the downfall of each has been handling the added distance of the Belmont Stakes at 1 ½ miles.