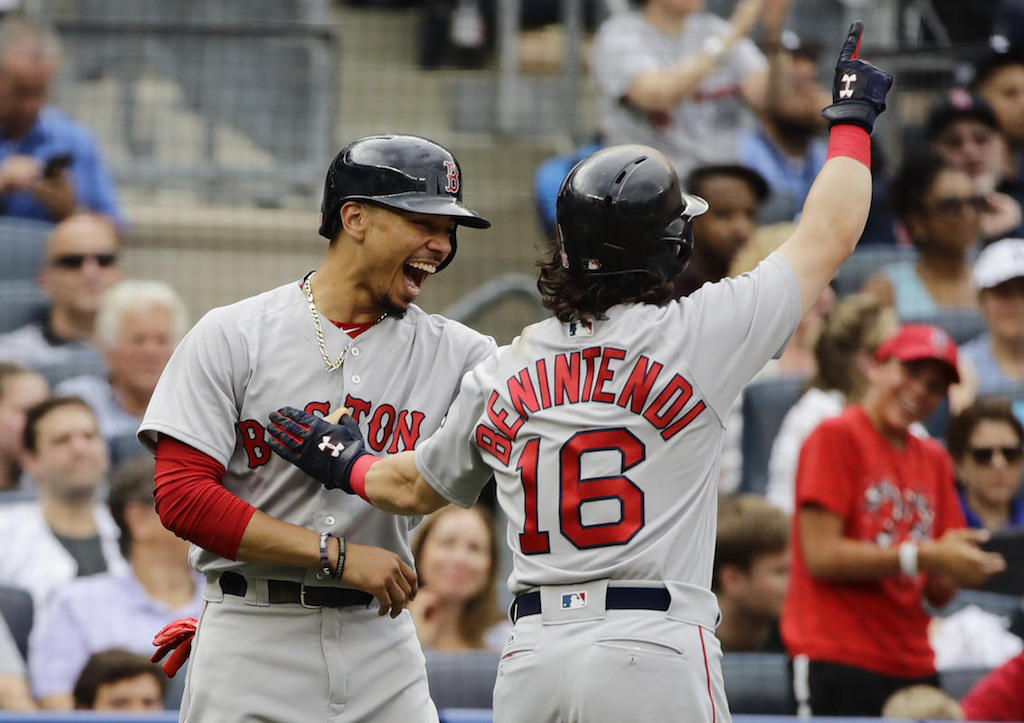 The backend of an extended home-and-home series between two of the most bitter rivals in baseball gets underway this Friday night with the first of three games between the New York Yankees and the Boston Red Sox in a 7:10 p.m. (ET) scheduled start at Fenway Park. These two AL East rivals squared off against one another last weekend with Boston coming away with a 2-1 series victory. Heading into Thursday’s action, the Red Sox had a 4.5-game lead over New York in that heated division title race.

The Yankees (64-55) still have one more game to play against the New York Mets on Thursday at Citi Field after winning the first three games of this interdivision home-and-home clash. They beat the Mets twice at home before grinding out a 5-3 victory on Wednesday night as -162 road favorites. With Wednesday’s win, their road record now stands at 29-33. Even with last weekend’s series loss to the Red Sox, New York still holds a 7-5 edge in the season series.

Take a look at my weekend betting report over at Ask the Bookie.

Boston lost a make-up game against Cleveland to start the week, but it outscored St. Louis 15-8 in a two-game slugfest at Fenway to raise its record on the year to 69-51. The Red Sox have gone 38-21 at home this season and the total has stayed UNDER or ended as a PUSH in five of their last six home games.

New York is expected to get this crucial showdown started with Jordan Montgomery as its starter in a game that will be broadcast nationally on MLB Network. The left-hander faced Boston last Sunday in the Yankees’ tight 3-2 loss as +146 home favorites and he allowed just one earned run on two hits in 5 1/3 innings pitched.

It should be Drew Pomeranz’s turn in Boston’s starting rotation this Friday night. He picked up the win against New York last Saturday behind some solid run support. The lefty gave up three earned runs on seven hits over 6 2/3 innings pitched in Boston’s 10-5 romp. His ERA on the year now stands at 3.39 with a 1.34 WHIP.

Saturday’s 7:10 p.m. start at Fenway should feature CC Sabathia on the mound for New York. This left-hander is 9-5 this season with a 4.05 ERA and a 1.31 WHIP through 19 previous starts. He last faced Boston on July 16 and came away with the win after pitching six innings of shutout ball.

The Red Sox will counter with Chris Sale as their starter. The staff ace failed to get the decision in last Sunday’s start against New York, but he only allowed one earned run on four hits in a full seven innings pitched. The left-hander is 14-4 this season with a 2.51 ERA and a 0.88 to make a strong case for AL Cy Young honors.

Top online sportsbooks currently have the Red Sox tied with the Cleveland Indians and the Houston Astros as the favorite to win the AL Pennant at +200. The Yankees are fourth at +525.

Look for Sonny Gray to take the mound for New York in Sunday’s series finale. Since coming over in a trade from Oakland, he has gone 1-2 in his first three starts but the right-hander did pick up the win against the Mets on Tuesday after allowing just two earned runs on five hits over six innings. His overall ERA stands at 3.37 with a 1.18 WHIP.

Boston will try and close things out with a win in this 1:30 p.m. matinee on TBS with Doug Fister getting the start. Monday’s outing against Cleveland was a bit rough after giving up five earned runs on seven hits in just 4 1/3 innings on the mound. The right-hander has a 5.56 ERA and a 1.65 WHIP heading into this game.

— The Yankees have won the first game in six of their last eight series and the total has stayed UNDER in eight of their last 10 road games against a team with a winning record.

— The Red Sox have won eight of their last nine home games and the total has stayed UNDER or ended as a PUSH in 19 of their last 26 games played at home.

— Head-to-head in this bitter division clash, New York has won four of the first five games played at Fenway this season and the total has stayed UNDER in four of those games.

This should be another great series coming off last week’s clash in New York and while the Yankees have had their way with Boston at Fenway this year, I am leaning towards the Red Sox to win this series as well. I like Boston’s matchup on the mound in the first two games and I also think its lineup will be a bit more productive than New York’s.