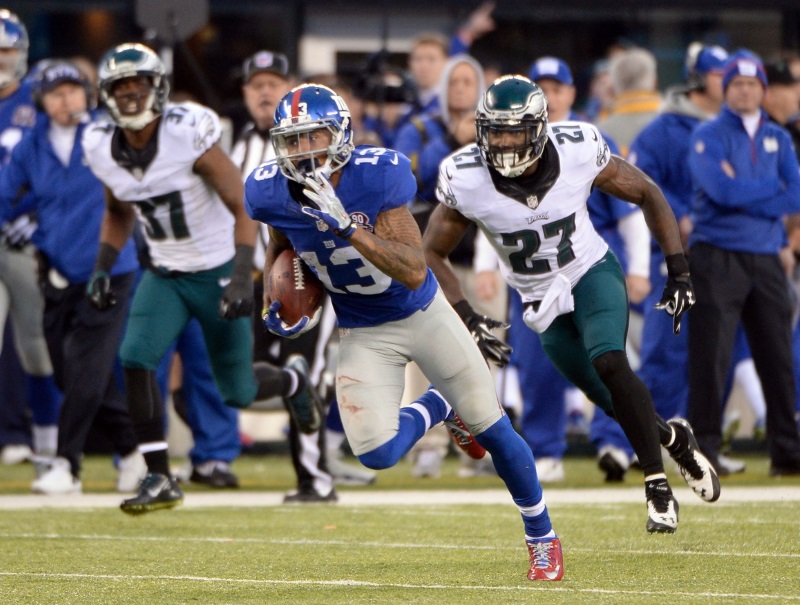 One thing the New York Giants know is that to get the most out of their offense as they prepare to face the Philadelphia Eagles, they need to get some contributions from their best wide receiver. And it is no secret that the receiver in question is Odell Beckham, who became an injury concern last weekend when he was removed from the game against the San Francisco 49ers. So Monday night football bettors will be watching the situation closely as the Giants will make a decision during pre-game warm-ups as to whether Beckham will play in this game that begins at 8:30 PM ET at Lincoln Financial Field. BetAnySports customers will have an opportunity to make real-time wagers after the opening kickoff, as they challenge the football odds through the vast facilities of Live Betting Extra.
The Giants lost their first two games of the season, and did so in rather bizarre fashion, as they blew double-digit leads in the fourth quarter. To their credit, they have bounced back with three straight victories, and the last one was more or less a life-and-death affair, as they completed a 30-27 victory over the Niners on a last-second drive. In that game, Beckham had to leave with a hamstring injury. He actually returned on the last series, but the hamstring has obviously still been bothering him, because he did not take part in any practices at all until the walk-through on Sunday.
Although he did make the trip to Philadelphia, which is generally a good indicator that he is likely to play, the Giants’ staff wants to put him through warm-ups before the game to see if there are any problems. It would appear that he would not be 100% if he did take part. But, as most people would agree, he could be pretty formidable at 75%.
In the Monday night football betting odds posted on this game by the people atBetAnySports, the Eagles are laying points at home
Philadelphia Eagles -5.5 (-101)
New York Giants +5.5 (-109)
Under 50.5 points  -107
Over 50.5 points  -103
Beckham was not the only receiver for the Giants who has been going through hamstring problems. Rueben Randle, the second-leading pass-catcher, is in pain but has been able to practice. So he is listed as “probable.” And according to Beckham himself, the ailment he is experiencing right now is not as bad as the one he had as a rookie last year, which kept him out of training camp as well as the first four regular-season games. New York is still without the services of Victor Cruz, who fractured his knee against the Eagles last year but is now dealing with a calf injury. So as you can imagine, it is critical that Beckham be able to play, if at all possible.
BetAnySports patrons saw the Eagles bust out for 519 yards last week against New Orleans, and they got great contributions out of the backfield, which is deep, when you consider the talents of DeMarco Murray, Ryan Mathews and Darren Sproles. Of course, we must also take into consideration that the Giants have done a pretty good job against opposition ground attacks, permitting only 3.5 yards per carry and 80.6 yards per game. And Mathews is now dealing with a groin injury.
Anyway you look at it, Eli Manning has been pretty impressive. His completion percentage is a solid 66.5% and he has thrown ten touchdown passes. This is a guy who has had a tendency to blow up with interceptions, but he has only thrown two footballs into enemy hands, and the effect of his for sacks has been minimal (losing only five yards). So the conclusion is that his work with offensive coordinator Ben McAdoo, with whom he had some uncomfortable times last season, has been fruitful.
Get on board with BetAnySports, where reduced juice wagering is the order of the day, and you can be in action all night long with Live Betting Extra……Don’t forget that you can use Bitcoin to make any deposit you want, up to $25,000!
Previous News Next News