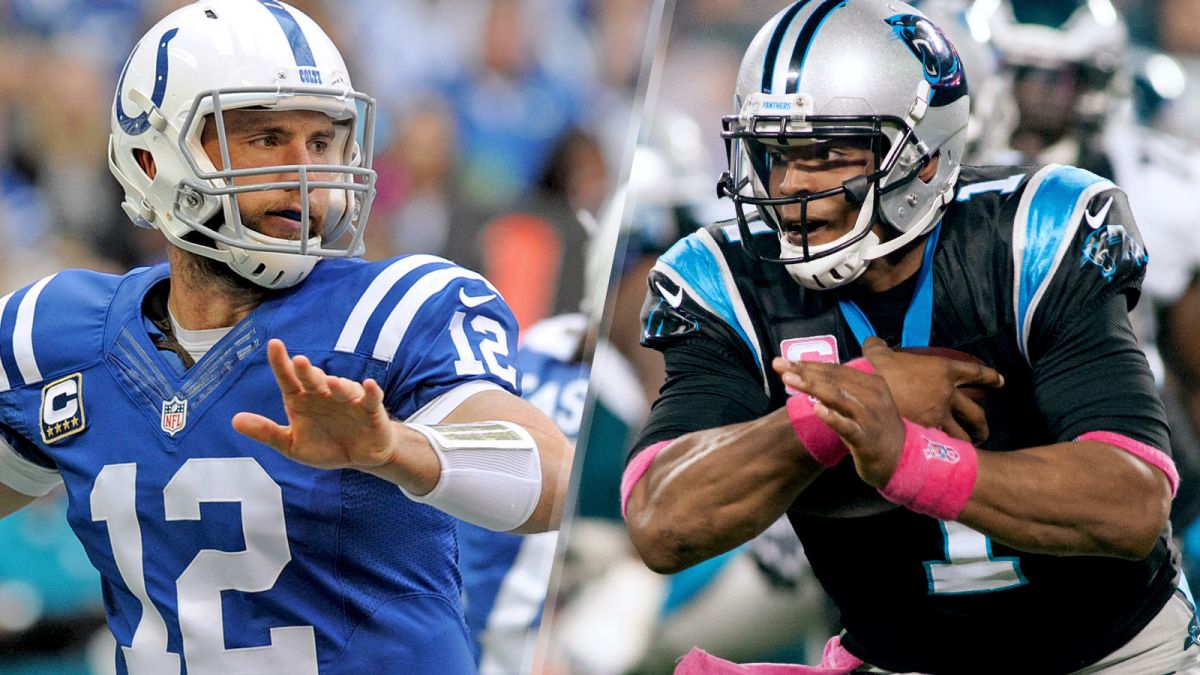 By Charles Jay
What has been the problem with Andrew Luck this season? Why has he been able to complete only 56% of his passes for just 1398 yards, with nine interceptions? Well, it was known that at least some point, he was dealing with a bad shoulder. And no it appears that he has been playing with fractured ribs, although that has not shown up on the NFL’s official injury report. And the league has begun an investigation into that.
Of course, BetAnySports customers know that this is the kind of information that might be helpful to them along the way, but it wasn’t available. And now it has led to much speculation; namely, that he has been bothered by one injury or another from the season’s start, when he flopped against the Buffalo Bills. This is the cloud that hangs over the very troubled Indianapolis Colts organization as the team heads into Monday night’s contest against the undefeated Carolina Panthers, which kicks off at 8:30 PM ET at Bank of America Stadium in Charlotte.
The Colts are still the first-place team in the AFC South, but they are extremely lucky to be there, if you pardon the pun. This has set itself up a little like the NFC South last season, when Carolina won the division with a  7-8-1 record. But the Panthers are not going down that road this year, having won their first six games, with a 5-1 mark against the football pointspread.
In the Monday night NFL odds posted on this game by the folks at BetAnySports, Carolina is the home favorite:
Carolina Panthers  -5 (-105)
Indianapolis Colts  +5 (-105)
Over 45.5 points  -105
Under 45.5 points  -105
The Colts, and in particular coach Chuck Pagano, who is the face of the team at press conferences, has been very secretive about Luck’s condition when answering questions from the media. Now we are probably getting some more evidence as to why that was.
What DOESN’T seem to be a secret is that Pagano and general manager Ryan Grigson have been in hot water. Those two have been at odds as to the best way to build a winner, and the feeling among many veteran NFL people is that Grigson, a former personnel director for the Philadelphia Eagles, was in above his head with the GM position. And he has been at the center of controversy as well, as the “complainant” in the Deflategate scandal, and no it looks like he has egg on his face. Is this why owner Jim Irsay was reportedly screaming at him in the locker room after the 27-21 loss to New Orleans, in which the Colts got down by a 20-0 score?
BetAnySports patrons who have observed pro football over the years have seen these scenarios, which start out badly and just keep getting worse. So it would not be all that surprising if the Colts folded over the next few weeks, as they have to tackle the Denver Broncos and Atlanta Falcons after this.
And this is an especially dangerous situation for them, because the Panthers appear to be all about the chemistry. They don’t have glittering numbers, which would normally be associated with a team that was 6-0. Their quarterback, Cam Newton, hasn’t completed his passes any more frequently than his fellow #1 overall draft pick, Luck. And there is nothing necessarily overpowering about the Carolina ground game. But all this team does is find ways to win, while Indianapolis has been finding some very depressing ways to lose, and build an atmosphere that is likely to perpetuate that.
BetAnySports has the “goodies” that could help you be a winner against the Monday night NFL odds, including reduced juice wagering, and those savings mean something over the course of a season……Keep in mind that you can also make your deposits in Bitcoin. So go get ’em!
Previous News Next News