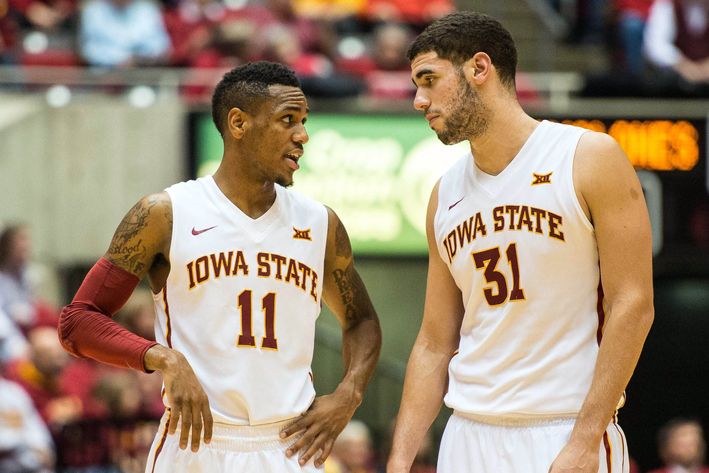 Cincinnati wraps up a challenging December non-conference schedule on Tuesday. UC will have played four games against teams that participated in the NCAA tournament a year ago and three that are currently ranked in the latest AP poll: Iowa State (11), Xavier (6), Butler (9) and VCU (NR).

Troy Caupain ranks second in the league and 21st nationally with a 3.6-to-1 assist-to-turnover ratio and ranks among the league leaders in assists (fourth at 4.5) and steals (12th at 1.2). Farad Cobb leads the American Athletic Conference and ranks 24th in the nation with a .471 three-point shooting percentage.

Jacob Evans leads the American Conference in free-throw shooting percentage (.929), making 26 of his 28 attempts this season. He enters the Iowa State game having made his last 14 free throw attempts. Cincinnati is one of 11 teams to make the NCAA tournament each of the past five seasons.

The Bearcats are seeking the program’s 30th NCAA tournament appearance this season. Only 18 teams in the nation enter the year with at least 30 trips to the Big Dance. The Bearcats have held their opponents under 70 points in 47 of the last 50 games dating back to the 2013-14 season and in 104 of the last 114 contests (91.2 percent) since the start of the 2012-13 campaign.

The Bearcats earned a 69-63 road win at VCU on Saturday. Troy Caupain and Farad Cobb scored a team-high 15 points. Gary Clark added 13 points and nine rebounds. UC made a season-high 30 free throws and out rebounded the Rams 42-37.

Cincinnati leads the series with Iowa State 3-1 all-time, having won the last three meetings. The Bearcats won the last matchup, a 78-70 result in the semifinals of the Global Sports Classic on Nov. 23, 2012 in Las Vegas, Nev. Today’s contest is the first in the series not played at a neutral site.

The Cyclones are led by preseason All-American Georges Niang, who averages 18.7 points – second-most in the Big 12. The leading active scorer in the Big 12, Niang is averaging 22 points while shooting 54.5 percent from the field – with a pair of 30-point games over the last four contests. He is listed on several award watch lists: Wooden Award, Karl Malone Award (top power forward), Oscar Robertson Trophy and the Naismith Trophy.

On several award watch lists himself, Morris leads the Big 12 and ranks fifth nationally in assists (7.7) and assists-to-turnovers ratio (5.5-to-1). McKay currently averages a double-double (15.3 points and 10.6 rebounds) and ranks nationally in field goal percentage (14th at 64.2) and offensive rebounds (18th at 4.1).

The Cyclones rank among the top shooting teams in the nation (ninth at 51.2) with four players making better than 50 percent of their attempts this season. Iowa State has participated in each of the last four NCAA tournaments and won each of the past two Big 12 tournament titles.

The Cyclones were picked to finish third in the conference in a preseason poll of the league’s coaches behind Kansas and Oklahoma.

Iowa State posted a 25-9 overall record and tied for second in the Big 12 with a 12-6 league mark a year ago under Fred Hoiberg, who now coaches the NBA’s Chicago Bulls.

For all your College Basketball and Football needs, go to the world’s best online sportsbook today for all the latest lines and get your picks in before it’s too late.