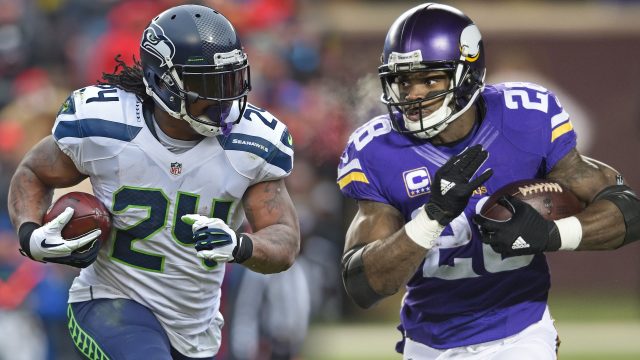 Two of the NFL’s most productive running backs over the past several seasons will be making their debut for new teams next season. To add a bit of betting action to the anticipation of just how big an impact either player will have, some of the top online sportsbooks have released some player prop bet odds based on their head-to-head performance against one another.

Adrian Peterson had played his whole NFL career in Minnesota, but that marriage came to a bitter end after 10 seasons when the Vikings decided to move in a different direction. Peterson signed with New Orleans as a free agent and ironically enough the Saints just so happen to open the 2017 regular season on the road against Minnesota.

Marshawn Lynch walked away from the NFL after the 2015 season, but the lure of playing for his home-town Oakland Raiders brought him out of an early retirement. He started his career in Buffalo as a first-round pick of the Bills in the 2007 NFL Draft. In 2010 he signed with Seattle and went onto to help the Seahawks win the Super Bowl in 2013.

The following is a look at the best value in the betting odds for a pair of head-to-head scoring props for the upcoming season.

Over the course of his career in Minnesota, Peterson made his way into the end zone 97 times including 11 scores in 2015 when he rushed for 1,485 yards in his last season starting all 16 games. His role with New Orleans will be limited with Mark Ingram still in place as the lead back, but the Saints will not hesitate to turn to AP in a goal line situation.

Lynch only played in seven games in 2015 before calling it quits at season’s end, but his best production finding the end zone was in his previous four seasons when he posted double-digit touchdown totals in each campaign. He is another power back that gives you a viable option in short yardage situations so I would expect the Raiders to also turn to Lynch to get the ball across the goal line when the need arises.

The main reason why I am going with Peterson in this prop is New Orleans’ opponent in Week 1. Look for Saints’ head coach Sean Peyton to find a way to get AP into the end zone against his old team in that Week 1 game.

Most Touchdowns Scored in the 2017 Regular Season

This head-to-head prop has been handicapped with Peterson getting +2.5 touchdowns at -130 betting odds. The moneyline odds on Lynch -2.5 touchdowns have been set at +100.

Peterson’s best effort running the ball came in 2012 when he rushed for 2,097 yards. He scored 12 touchdowns that season, but his most productive year when it came to scoring was back in 2009 when he posted a total of 18 TD’s. Nobody expects AP to put up those kinds of numbers this season in New Orleans, especially on an offense that relies heavily on the pass to move the ball. However, if he does have any juice left in those legs he will still be a big part the Saints’ overall production.

Lynch was at his best when he was in “Beast Mode” and that led to some very impressive stats over the course of his career. His highest rushing total came in 2012 (1,590), but his 13 touchdowns in 2014 was the highest single-season total of his career. The Raiders relied on a trio of backs in 2016 led by Latavius Murray, who is now with Minnesota. Both Jalen Richard and DeAndre Washington remain on the roster as the next two top two rushers, but this could create an opportunity for Lynch to post some big numbers both running the ball and scoring touchdowns if his 31-year old body is up to the task.

Both of these backs have the potential to make a major impact on their new teams and both could easily become an after-thought if there is no gas left in the tank or injuries take their toll. That is why I will take Peterson plus the 2.5 touchdowns in this prop given the added edge right out of the gate.