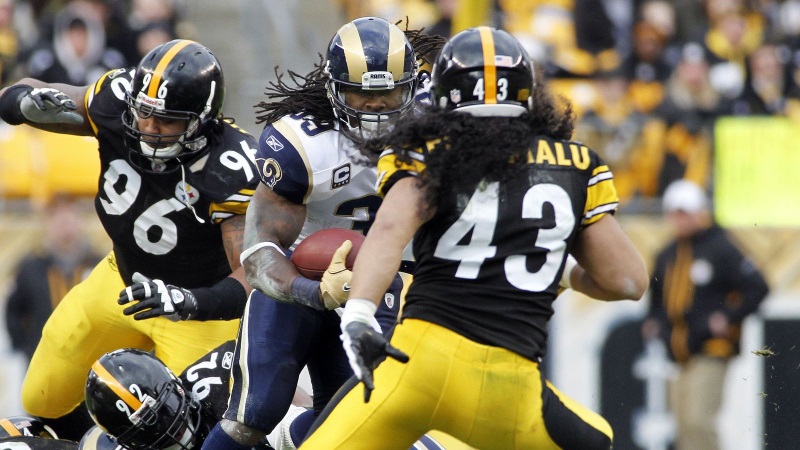 One NFL team is going to get a real shot in the arm this week with the return of one of the league’s best running backs, while another is hopeful of introducing one of the great backs of the future to the pro game. That is part of the storyline as the St. Louis Rams play host to the Pittsburgh Steelers in football action that gets underway at 1 PM ET Sunday at the Edward Jones Dome. Subsequent to the opening kickoff, BetAnySports customers can pl;ace their wagers on the side, total and various props through the facilities of Live Betting Extra.

The Steelers took it on the chin in the opener because they could not deal with the pinpoint passing of Tom Brady, especially with their defensive transition that is still in effect. But they came roaring back in the second week, blowing out the San Francisco 49ers 43-18. In those games, Le’Veon Bell, who gained over 2200 yards from scrimmage last season, was sitting out a suspension that was related to a marijuana arrest a year ago. But he can now come back to the lineup.

The Rams opened the season with a thrilling 34-31 overtime upset of the Seattle Seahawks, but they fell flat in the second week, as they dropped a 24-10 decision to the Washington Redskins and got very little going on offense (e.g., only eleven first downs). But they might be able to use first-round draft pick Todd Gurley for the first time this week.

In the NFL odds posted on this game by the folks at BetAnySports, it’s all even:

Here’s what is interesting about the Steelers’ situation – if you recall, when they were missing Bell with an injury in last year’s playoffs, they were very listless offensively against the Baltimore Ravens, but they have made adjustments since then; namely, the insertion of DeAngelo Williams at running back. It has worked better than we thought; Williams has averaged five yards per carry. And of course, that has helped open up things for the combination of Ben Roethlisberger and Antonio Brown, which has already produced 18 receptions for 328 yards.

BetAnySports patrons who put some stock in drive stats will take note that the Steelers once again lead the NFL in offensive yards per drive, with 45.95, which is a huge figure. But they are also second from the bottom when it comes to yards allowed per drive (43.33).

NFL odds bettors should be cautioned about the potential impact of Gurley, as least as far as this game is concerned. He has only just started having full practices with the team, and is listed officially as “questionable” on the team’s injury report. The feeling on the part of a lot of scouts was that even though he has banged up his knee a couple of times, he has the kind of ability where he could become a dominant running back. But it is quite likely that the Rams are not going to push him very hard, at least at first. So don’t weigh the “Gurley Factor” too heavily.

If you are not already signed up with BetAnySports, you need to be, as they are offering reduced juice wagering so that you get to lay much less of a price in the NFL odds……Also, don’t forget about their live in-game betting, as well as the availability of deposits made with Bitcoin!