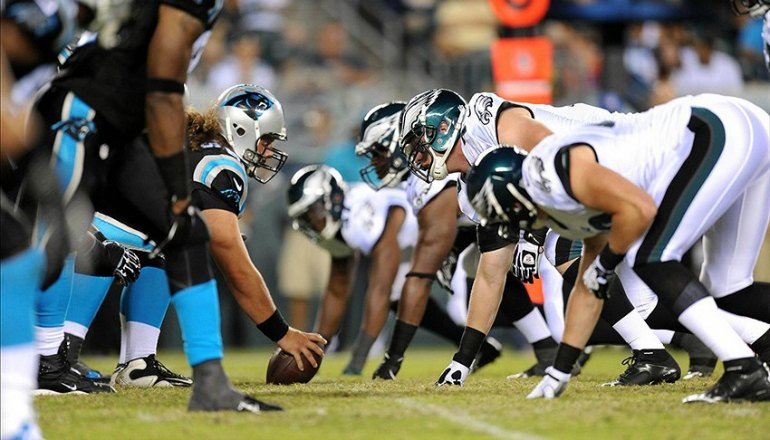 If the Philadelphia Eagles‘ offensive performance over the last two weeks is any indication, the Carolina Panthers might have their hands full in their quest to remain undefeated and King of the Hill in the NFC South division. Certainly those Philadelphia fans who were agonizing over the way this team played in the first few weeks are hoping there is an upward trend at work. We will find out at 8:30 PM ET, when things get underway at Bank of America Stadium in Charlotte, with live television provided by NBC. After the opening kickoff, BetAnySports customers have the opportunity to challenge the Sunday night NFL betting odds in real-time, using dynamic numbers that are provided through the facilities of Live Betting Extra.
Philadelphia has gained more than 900 total yards over the last two games, and that two-game winning streak is something to cheer about, when you consider that they lost three of their first four games. And they manhandled a New York Giants team that had won three games in a row. So these are encouraging signs, especially as last week’s win came with 155 rushing yards, 109 of which were produced by DeMarco Murray, who got off to such a pitiful start that we were measuring it by inches per carry.
Carolina does not have to prove that it is “for real” anymore, not after their fourth-quarter comeback to beat the Seattle Seahawks in one of the toughest venues in the NFL. Cam Newton might have modest statistics (55% completions, 6.9 per attempt), but he fled this club on a pair of 80-yard touchdown drives in the last five minutes. It is commendable, at the very least, that the Panthers have been able to accomplish what they have without a real standout wide receiver or running back. Think about that for second – Ted Ginn has 13 catches, which is more than any wideout on the team, and Jonathan Stewart is averaging only 3.8 yards per rushing attempt.
In the reduced juice Sunday night NFL betting odds that have been posted on this game by the people at BetAnySports, the Panthers are the favorites at home:
Carolina Panthers -3 (+102)
Philadelphia Eagles +3 (-112)
Over 45.5 points -104
Under 45.5 points -106
What has to be of some concern to the Eagles is the erratic behavior of Sam Bradford when he drops back to throw. Bradford threw three interceptions against the Giants, giving him nine for the season, and Philadelphia was fortunate that those miscues did not prove costly. But this is a pretty good defense that’s been assembled in the City of Brotherly Love, and there has been so much focus on Chip Kelly’s offense that not enough people notice that the Eagles have held their opponents to just 3 1/2 yards per carry and that they have kept opposing passers relatively in check, allowing just 6.2 yards per attempt and intercepting eight passes.
Of course, defense is a calling card for the Panthers, and they are one of the few teams that has allowed fewer than 60% completions. All-Pro Luke Kuechly came back to the line up against Seattle (had missed three games with a concussion) and had 14 tackles. BetAnySports patrons can count this as a harbinger of things to come.
But Carolina has a number of different options to defend, including backups to Murray at running back. Ryan Mathews is at 4.9 yards per rush, and Darren Sproles has yet to show his best stuff as the dual-threat option out of the backfield. Those NFL bettors like to look at scheduling situations may have to evaluate what the Eagles are going to do on a short week against this Panthers squad, which traveled about as far as you can go in the NFL and has now returned for a home game. What else should we consider? Well, Carolina, over an extended period, has a 13-6-2 ATS record as a home favorite. They may have trouble with Philadelphia’s multi-varied offense, IF that offense shows up on Sunday night, but don’t expect Ron Rivera’s team to roll over, especially
with a little payback in mind for last year’s 45-21 Eagles victory, which came before the Panthers’ late run that brought them to the NFC South title.
Count on BetAnySports to bring you more value for your sports betting dollar with reduced juice wagering, where you won’t find yourself laying the customary -110…….And the automated process makes Bitcoin transactions a snap!
Previous News Next News