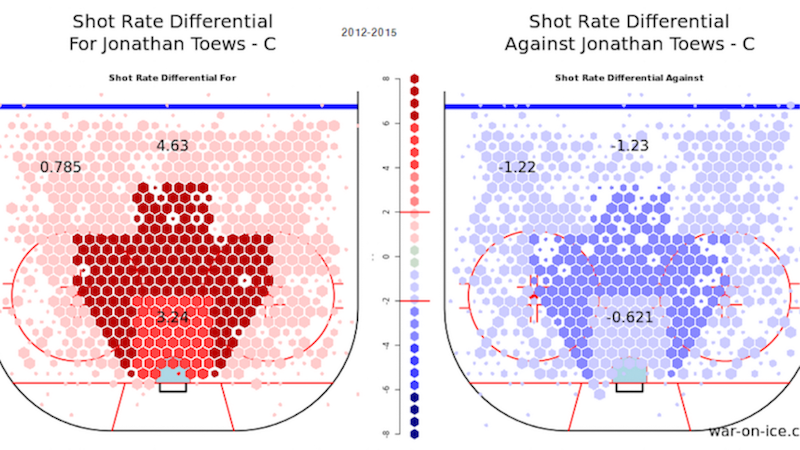 Using advanced NHL stats is a must if you want to win more bets. The betting market is a little softer in the NHL compared to other sports such as the NFL, NBA, and college football.

That said, if you understand the market and how to use some of the advanced NHL stats, you can find value in NHL betting.

Some of the more advanced metrics can give you a better idea of how a team will perform. Here’s how you can use those advanced NHL stats.

If there is one advanced statistic that you will hear about while watching an NHL game, it’s the Corsi metric.

Team Corsi numbers reflect 5-on-5 close-game situations. Corsi is only measured when games are within a goal in the first two periods and tied in the third. This eliminates scoring in games that are out of reach. Often teams with large leads will go into a defensive shell and teams trailing will take a large number of shots.

Corsi is the most accurate measurement of team puck possession. Simply put, a “Corsi For” is a shot attempt in a 5-on-5 close-game situation. A “Corsi Against” is a shot allowed in the same situation.

Vegas, which leads the West Division, is currently second in Corsi percentage (52.2). Florida is 8-2-2 and second in the Central Division. The Panthers are third in Corsi (52.01).

The problem with Corsi is that it doesn’t take into account the quality of a shot. A wrist shot from the blue line is different from a rebound shot in front of the net. This is why when looking at advanced NHL stats, Corsi is often used in conjunction with another advanced stat like Expected Goals.

Expected goals takes into account a shot’s quality. A shot made from 10 feet in front of the net after a rebound is expected to result in a goal. The slapshot from the blue line can score, but is not expected to score as often as the 10-footer.

Not surprisingly, Montreal leads the NHL in Expected Goals percentage (56.56). The Canadiens, now fifth in scoring (3.47 goals per game), were averaging over four goals per game at one point this season.

A team’s Fenwick percentage will normally be very close to its Corsi number. The reason is that the Fenwick calculation is the same as Corsi though it takes out blocked shots.

There are teams that place an emphasis on blocking shots. Primarily defensemen are the ones doing the blocking. If a team is blocking more shots, then it is usually playing more in its own zone.

Like Corsi, Fenwick is best utilized in conjunction with other advanced stats.

SPORTS BETTING 101: HOW TO BET ON HOCKEY

Most NHL handicappers will agree that assessing goaltending is the hardest part of handicapping NHL games.

Two useful advanced statistics are 5-on-5 Save Percentage and Goals Saved Above Average (GSAA). Save percentage is more useful in 5-on-5 situations where all the variables are the same.

GSAA is relatively new and is similar to WAR, or Wins Above Replacement. This stat allows you to analyze how many goals a goaltender has saved or allowed compared to what the league average netminder has done.